Maude Barlow, bestselling author, activist, and Honorary Chair of the Council of Canadians will be with us in the Comox Valley on October 22 to talk about the possible impact of the federal election and re-focus ourselves on the public protection of water. 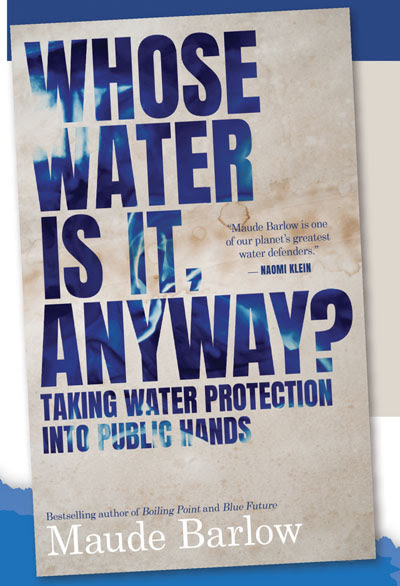 Maude is touring the country, introducing communities to her new book “Whose Water Is It, Anyway:  Taking Water Protection into Public Hands”.   In it, she details how communities around the world are responding to the urgent need to protect fresh water.  The book provides an updated road map for communities and organizations to take action on recognizing water and sanitation as human rights, phasing out the sale or use of bottled water, and protecting publicly financed, owned and operated water and wastewater services.

Two Comox Valley Communities – Cumberland and Comox – committed themselves to the protection of water in 2012 by becoming Blue Communities.  Maude will recognize their efforts as being among the first to make this commitment.  They have since been joined by communities that include 15 million people, including Paris, Montreal, Bern, Berlin, Munich, Thessaloniki, the World Council of Churches, and McGill University, among many others.

“We recognize that October 22 is the morning after the election, but what better way to spend it than in the company of Maude and others who are concerned about our water?”, says Alice de Wolff, Steering Committee member, Comox Valley Council of Canadians.   Bruce Gibbons of Merville Water Guardians will co-chair the event and provide us with updates on the Union of BC Municipalities resolution to stop the approval of licenses for bottling and sale of groundwater.

About Maude Barlow.
As Naomi Klein says “Maude Barlow is one of our planet’s greatest water defenders”.  She is the international bestselling author of 19 books, including the bestselling Blue Water trilogy. She is the Honorary Chair of both the Council of Canadians and Washington-based Food and Water Watch. She is on the executive committee of the Global Alliance for the Rights of Nature and is a Councillor with the World Future Council. In 2008–09, she served as Senior Adviser on Water to the 63rd President of the UN General Assembly and was a leader in the campaign to have water recognized as a human right by the UN. In 2005, she won the prestigious Right Livelihood Award, which is known as the “alternative Nobel.”

This event is co-hosted by the Comox Valley Chapter of the Council of Canadians. This tour stop is sponsored in part by Laughing Oyster Books.